A Funny Thing Happened on the Way to the Hair Salon

I had told my hairdresser that we could do some soft highlights for the summer. I’d gone darker for awhile, now wanted to change it up a bit with more of a sun-kissed look. So I said to “just go a little bit lighter.”

Famous last words. Even she was surprised at the color it ended up being and used the term “platinum” to describe the new bleached version of my head. The next day my co-worker called me “blondie” as soon as he walked in my office. Awesome.

Now, I really didn’t mind, it had actually turned out pretty nice. It was just definitely unexpected. So imagine my surprise then when (my angel) Shobi gets incredibly excited about my new look, telling me how perfect it is.

“We match! Now you’re my mini-me! You look like my kid sister. Don’t you see the resemblance? This is great!”

(Note: Shobi is more the traditional, golden hair, eyes of fire, luminous kind of angel. Poje is tall, dark and handsome. They’re like an older and younger brother to me. Totally a sibling vibe.) 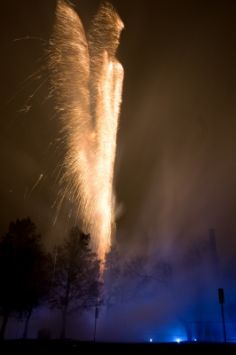 No Grid for This

I figured Shobi was just doing his “keeping me in my happy place and not letting me freak out” thing so I just smiled and nodded and didn’t think much of it.

I mean, really. What am I supposed to do with comments like that? I have no grid for any of this.

Well, wouldn’t you know, just a couple days later I was on a plane and had “happened” to grab a copy of Charisma to read on the flight. And they just “happened” to have an article on angels.

In it, John Paul Jackson was talking about how an angel helped Peter escape prison, but then when Peter knocked on the gate of Mary’s house, they didn’t even let him in, because they were thinking it wasn’t actually Peter, but that it was just his angel (Acts 12:5-16).

John Paul said that many understand these verses to indicate that our guardian angels can sound and even look like us. Really?

“Shobi, it turns out you might actually be right about this!” (I know, I know. Oh me of little faith.)

He just smiled, tipped his head to the side and shrugged, “Told you…”