Have you ever wondered what happens when we pray in the Spirit? When our mind doesn’t understand what we’re saying, who does? And what do they do when they hear this supernatural intercession?

Ephesians 6:17 tells us that the sword of the Spirit is the word of God, and we have looked at how our words of prayer equip angels for Kingdom warfare and give them something to fight with. Now we want to get a vision for the role angels can play in translating our spiritual prayers into blessing and breakthrough realized in our natural world.

When we have experiences in the sacred supernatural it is sometimes difficult to describe exactly what we are seeing. Paul talked about combining spiritual thoughts with spiritual words (1 Cor. 2:12-13). There are spiritual truths revealed, but we may be limited by human vocabulary and images. Many of our prophets seemed to have this challenge. Daniel struggled to define what he saw in his visions and often ended up using similes, explaining that animals “looked like” ones he’d seen in the physical realm. For example, one was “like a lion”, except it had wings (Dan. 7:4). Another “resembled a bear” (Dan. 7:5). Another appeared “like a leopard,” except it had four heads (Dan. 7:6)!

Ezekiel used similar words when the heavens were opened and he saw visions of God (Ezek. 1:1). Throughout chapter one he describes supernatural scenes in this way: There was “something like glowing metal in the midst of fire” (v. 4), “there was something that looked like burning coals of fire, like the appearance of torches” (v. 13), “there was something like an expanse” (v. 22), and “something resembling a throne” (v. 26).

In the book of Revelation, John did the same thing when he attempted to communicate what he was seeing in the spiritual realm with natural words: “The first creature was like a lion, and the second creature like a calf, and the third creature had a face like that of a man, and the fourth creature was like a flying eagle” (Rev. 4:7). And while this sounds fairly down-to-earth and relatable, he then goes on to add that they all had six wings and were covered with eyes in front and behind (Rev. 4:8), so definitely something special and other-worldly there too! 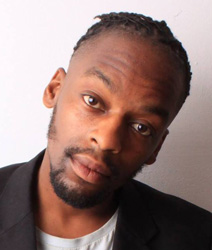 Malachi Talabi is one of our Everyday Angels online students living in the United Kingdom. He’s had many awesome experiences with angels in visions during the day as well as at night through dreams and he recently shared his latest snapshot of the spirit with us below.

As we’ve seen in Scripture, God uses images similar to our physical world to convey spiritual revelation to us. Visions are like dreams in that they often are not literal but symbolic, and the truth is communicated in the idea of these pictures. This material world is a shadow of the most real realm (2 Cor. 4:18) and we glimpse these concepts of Heaven in a way that is meaningful to our natural minds.

Obviously Malachi is familiar with 21st century computer technology, legal documents, and a court of law. We understand then that that is why those are the natural images God uses to communicate profound supernatural truth to him. It’s not about the symbols; it’s about the meaning of those symbols and the ultimate message of the vision. That is, Heaven is listening and acting on our prayers.

“I was praying in tongues and using my imagination. I saw what looked like a computer center with hundreds of people typing. As I prayed, they typed. It was as if they were scribing what I was saying. When I finished, they printed my prayers. It was like I was in Heaven’s intelligence center and the angels were typing up solutions and insights, understandings, the wisdom of God. These things were being given to me in the spirit.

“The scene changed and I was in court. Someone was typing my words as I spoke, like a stenographer. I left with a court order I received. On the document there was blessing, abundance, victory, and breakthrough.

“Lots of things happen when we pray in tongues. It’s as if we receive legal documents. It’s almost like a way to ‘hack Heaven’s intelligence center,’ that is, the wisdom of God. When we pray in tongues, we go to different places in the spirit and angels can scribe our prayers to God.

“The scripture that came to my mind was Psalm 103:20 – Angels heed the voice of God’s word. And when I did a search for ‘scribe angels,’ I found the scripture about an angel coming because of Daniel’s words in Daniel 10:12.

“I’d love to know your thoughts on this because I was deliberately trying to picture what was happening in the spirit and this came up.”

Malachi positioned himself for this vision by engaging his godly imagination and actively looking with the eyes of his heart into the spirit realm to see what he could see (Eph. 1:18). Praying in the Spirit is our sacred superpower and this is truly spiritual prayer (1 Cor. 14:14-15). As believers our spirit is one with God (1 Cor. 6:17) and by praying in tongues Malachi allowed Holy Spirit to intercede through him, decreeing and declaring the perfect will of Heaven (Rom. 8:26-27).

It’s important to share our supernatural encounters with our spiritual advisors, which is what Malachi did (Prov. 11:14). We also want to compare these encounters with the Bible and he did this as well, confirming what he experienced lined up with the written word of God. Another passage of Scripture which explains the symbolic picture Malachi saw is found in the last book of the Old Testament which, incidentally, bears his name:

“Then those who feared the LORD spoke to one another, and the LORD gave attention and heard it, and a book of remembrance was written before Him for those who fear the LORD and who esteem His name.” (Malachi 3:16)

We are the ones who fear the Lord and are speaking, and it’s recorded. It makes sense that it is angels who are writing the book of remembrance, just like the stenographers Malachi saw in his vision. This is an awesome visual of what is happening in the spirit realm. It is powerful, profound, and a picture to which we can immediately relate. It shows how we are partnering with angels in serving Father and advancing His Kingdom. Heaven is listening to see what we will say.

Like a dual signature check authorized by God, the resources of the Kingdom are in a spiritual state of possibility, just waiting on us to sign off too. Angels are waiting for us to get in agreement with Heaven, see God’s vision and version of our lives and purpose to ponder and speak only from that place of prophetic potential and promise.

Just like the recorder angel in the book of Malachi, and the stenographer angel in Malachi’s vision – angels are with us. They are listening to see if we will speak God’s word and pray in His Spirit. When we engage in spiritual prayer we release angels into action to advance Father’s perfect plans, establishing His Kingdom here and now on earth, just as it is in Heaven.