We previously explored the revelation that in the Garden of Eden, Adam and Eve were able to see into the supernatural world naturally. They walked with God in the cool of the day and could easily interact with spiritual beings in the spiritual realm (see Genesis 3).

However, as a consequence of the fall and sin, as Adam and Eve’s descendants we have been born into the illusion that the confines of this four-dimensional Matrix are actually a limit to us. We wrongly conclude that our world is only made up of what our natural eyes see and our physical ears hear, and therefore mistakenly assume we can no longer engage the supernatural realm as Adam and Eve did.

If the story ended there, it would be fairly depressing. Thankfully, we can fast forward through the timeline of history and find the one other human being in all of Scripture who had a similar long-ranging conversation with the devil, just like Eve had. Jesus is the One who escaped the Matrix, and He showed us how to break free too.

We all know about Jesus’ temptation in the wilderness. His back and forth dialogue with the devil was essentially a repeat of the Garden of Eden’s temptation. This in itself is significant. But the question I want to address right now is: How could Jesus see satan so well? Nobody had seen into the spirit like that since Adam and Eve cut themselves off from the supernatural realm by choosing self and sin over the Spirit.

Who Jesus was waiting for

To discover our answer, we must look at what happened right before Jesus and the devil’s interaction. What made it possible for Him to see into the spirit realm?

This is the cool part. We find the secret in Mark 1:9 where we learn that Jesus had just been baptized by Holy Spirit. Wow! Scripture clearly explains the unfolding of events in that as soon as Jesus was baptized by the Spirit, then He saw the heavens opening and He saw the Spirit (Mk. 1:10). This is the first time in any of the Gospels we have a record of Jesus seeing anything come from heaven.

And not only was He seeing things from the spirit realm, He was now hearing them too. In verse 11 it says that Jesus “heard a voice come out of the heavens, ‘You are My beloved Son, in You I am well pleased.’ Again this is the first time we have a record in any of the Gospels of Jesus hearing His Father’s voice. 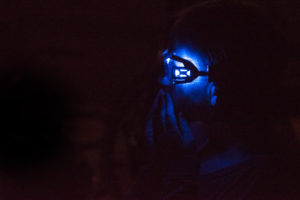 In a way, we can imagine it to be something like night vision goggles which enable you to see things you otherwise wouldn’t be able to. That is a simple picture of what Holy Spirit’s baptism did for Jesus. It reversed what happened in Eden. In Eden, their eyes had been opened to the natural realm and closed to the spirit realm, but now through the Holy Spirit, the eyes of His heart were opened and He could see clearly into the supernatural world.

And how do we know for sure that the supernatural world was now accessible to Him? How do we know that He was truly seeing in the spirit and experiencing that realm? Because Jesus then proceeded to have His long-ranging back and forth conversation with the devil (see Matthew 4:1-11). Not only that, but He was then ministered to by angels as well (Mk. 1:13).

Fallen angels, faithful angels, His Father’s voice, the heavens opening – Jesus was made aware of all of these things. It is as if a switch was flipped as the eyes of His heart were enlightened and He was now able to see clearly what had been there all along.

We know from Scripture that this is what He was waiting on. Because immediately after that is when Jesus – after 30 years of doing not much of anything we know of – is finally ready for ministry. This is what He had been waiting for. We’re back to the Garden of Eden! We’re connected to the spirit world again!

We can almost feel the excitement in Jesus’ powerful declaration, recorded in the very next verses of that passage (Mk. 1:14-15). Game on, guys! I’m ready! I’m seeing in the supernatural realm, I’m hearing from heaven, I’m being led by the Spirit. This can only mean one thing…

“The Kingdom of God is at hand!”

Back to Eden: Restoring the Super to Our Natural