Saved from Human Trafficking by a Dream

Just because a dream is frightening doesn’t mean it’s not from God. When the Lord established His covenant with Abram, the Bible says that as deep sleep came upon the patriarch, “terror and great darkness fell upon him” as well (Gen. 15:12). Likewise, when Jacob awoke from his dream of the heavenly ladder, he, too, was afraid (Gen. 28:17).

Obviously those dream encounters, scary as they may have been, were most certainly from God. While we may be tempted to dismiss a dark dream, Scripture demonstrates that God can speak through all our dreams, even the “bad” ones. We don’t want to let one of His words fall to the ground, therefore we purpose to honor our visions of the night as revelation from Heaven and pray accordingly (see Numbers 12:6 and Acts 2:17).

For example, I received the following dramatic testimony from Debbie Keever. Her husband Eddie had a terrifying dream, but they recognized God was speaking through the nightmare to warn them. They honored the dream as a heavenly message and prayed for supernatural protection and safety for their daughter. What happened next is extraordinary as the answer to their prayers unfolded in ways neither of them ever expected.

A Dream of Murder

I’ll let Debbie share their amazing story with you in her own words:

“My dreams since watching your free video event last September have been incredible! I now keep a dream journal and my husband, Eddie, has been paying more attention to his dreams as well. I was sharing with him some of the things I was learning from your teaching online, and he then told me about a dream he had that week regarding our 18-year-old daughter Allison, who is a freshman at NC State.

He said in the dream they were together when a car pulls up with strangers in it. She gets in the car. He has a bad feeling so he also gets into the car. They ride to an old house. They all go inside when my husband realizes there is an evil presence there. There are women who are trying to kill them. He said the house has a dumbwaiter that people who had been previously murdered were being shoved into. He knew these evil women were about to do the same to him and Allison, so he grabbed a piece of broken glass and began fighting them. He said he killed the evil women so they were able to survive. That was the end of the dream.

I was deeply disturbed about his dream and prayed to the Lord saying, ‘I don’t know what that means, Lord Jesus, but You do. Please protect Allison from the enemy this day.’

What happened next is reality. My daughter called me about midday on a Monday to tell me about a girl she met at NC State at some parties and events she’d attended since school began in the Fall. This young woman’s name was Sara Farrell but she was going by Arabella Ferrell. She claimed to be a freshman at State and was living off campus.

My daughter said about a month prior they scheduled to meet for lunch but the plans fell through. Turns out this girl was being sought by police for being involved with human trafficking. She was lying about being a student at State and everything else. Allison said all of Arabella/Sara’s social media info was deleted that day. I was in tears at the realization of the timing and how the Lord protected Allison from a potentially horrendous situation! Praise Jesus!!! 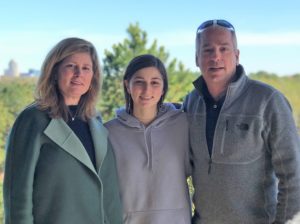 Charity, there have been several more unrelated dreams I’ve had that the Lord has sent me as warnings in recent days and months that have been astounding! All I have to say is Thank You for the teaching you’ve shared online that God has used to open my understanding to more of His mysterious ways! My life is definitely richer in ways money cannot buy!”

Praise God for His revelation through all our dreams – even the “bad” ones! It is also significant to note that although Eddie had the dream earlier, it wasn’t until Debbie heeded the warning in the dream and prayed accordingly for safety that then the enemy’s plans were foiled. The evil plot was exposed in the dream, and as the dream was honored, the plans became exposed in waking life as well. Once Debbie prayed, God answered, which demonstrates the key role and strategic partnership we have with Heaven in releasing miracles into our world.

A beautiful passage found in the Old Testament can help us re-frame dreams to see them from God’s perspective. Where do dreams come from? Why do we have them? We see a powerful summary of our heavenly Father’s design for dreams and how He intends to use them in our lives in the book of Job.

“Indeed God speaks once, or twice, yet no one notices it. In a dream, a vision of the night, when sound sleep falls on men while they slumber in their beds, then He opens the ears of men and seals their instruction, that He may turn man aside from his conduct, and keep man from pride; He keeps back his soul from the pit and his life from passing over into Sheol … Behold, God does all these oftentimes with men, to bring back his soul from the pit, that he may be enlightened with the light of life” (Job 33:14-18; 29-30).

Dream Keys Podcast: A Behind-the-Scenes Look at the Making of Our App

What was the genesis of our Dream Keys app?

Reviews: What App Users Are Saying

“Brilliant! Excellent! Exactly what I needed!” Find out what users like best about our new Dream Keys app!

Easily record and interpret dreams right on your phone!

A Christmas Dream: Santa & the Supernatural

Do Holy Spirit and Santa Claus have anything in common?

From Taiwan to Kenya: Glory Updates from Around the Globe!